Racism and Religion; Violence in America, Roots of Pentecostals, The Hip-Hop Culture and African Roots of Modern Science.

“Social Science: A Vehicle of White Supremacy?” International Journal for the Advancement of Counselling, 1986.

“The Prevention of Institutional Racism: Training Counselling Psychologists as Agents for Change” 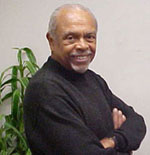