The Impact of race and gender on successful women who migrated to the United States, England, and Canada from English speaking Caribbean countries 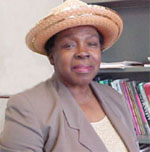 AFTER THIRTY-THREE YEARS OF SERVICE:
A DEDICATION TO DR. LILY B. SMALL

Dr. Lily B. Small has made outstanding contributions to the Africana & American Indian Studies Program (formerly Ethnic Studies) at California State University, Fresno for thirty- three years. Lily is a pioneer in the field of African American Studies coming at a time when the field was raw, when only anthropologists, sociologists, or historians were teaching about the Black experience in America. She brought passion, intellectual rigor and humanity into this newly designed discipline. Her accomplishments speak volumes of her dedication to the well being of our students, the Ethnic Studies Program, and the campus community-at- large. No doubt her proudest departmental accomplishment was in gaining approval of the major in African American Studies in 1998.

Dr. Small has served as more than a classroom instructor to her students. She has been a friend, confidant, and surrogate parent to countless number of students during her tenure. She exposed students and the community to the reality of what it is like to be poor, black and uneducated in America today—a reality that most of her students, black and white, were unaware, or thought of as in the past tense. She taught students about the hatefulness of racism and the cost of racism to America's soul. And her humanity went further as she exhorted students to work harder, learn more and go to the limit of their capabilities. The late Dr. James Rogers described Dr. Small as “The Mother of Ethnic Studies.” Over the years as professor and chair of Ethnic Studies, she has truly epitomized that characterization.