Second Symposium on the Holodomor-Genocide 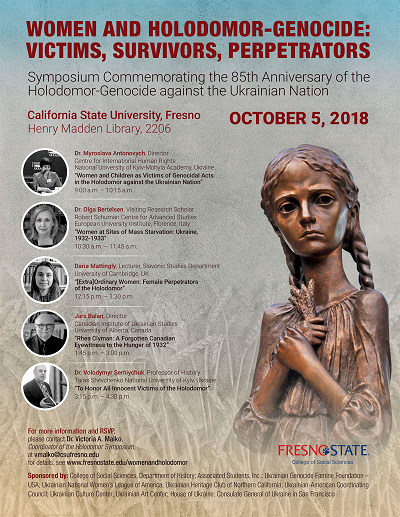 Last year marked the 85th anniversary of the Holodomor-genocide, perpetrated by Joseph Stalin and those around him against Ukrainians in 1932–1933. The theme of the second symposium is “Women and the Holodomor–Genocide: Victims, Survivors, Perpetrators.” All events were scheduled on Friday, October 5, 2018, in the Library(Room 2206, South Wing) at California State University, Fresno. The program featured speakers from Canada, Italy, UK, and Ukraine, with exhibitions of posters and books, lectures, a one-act play "Buried Truth" at the Fresno Art Museum, a documentary film screening of "Hunger for Truth: The Rhea Clyman Story" and post-screening discussion with film director Andrew Tkach, plus musical performances. In August, Coro Stetsenko of the Fresno Community Chorus Master Chorale under the baton of Dr. Anna Hamre performed Kyrylo Stetsenko's "Panakhyda" (Requiem) in memory of the innocent victims of the Holodomor. All events are free and open to the public.

Link to the press release:
http://www.fresnostatenews.com/2018/10/01/symposium-commemorates-ukrainian-holodomor-genocide/

For more information about the events and a free parking code, please or e-mail Dr. Victoria A. Malko, Coordinator of the Holodomor Symposium, at vmalko@csufresno.edu.

First Symposium on the Holodomor Genocide

The year 2017 marks the 84th anniversary of the Holodomor – the Ukrainian famine-genocide. “Holod” means “hunger” and “moryty” means to “exterminate” or “starve to death.” A two-day symposium on the theme "Hunger for Truth: Illuminating the Hidden History of the Holodomor" will take place on October 5-6, 2017. The program features renown speakers from Canada, Ukraine, and the United States, with exhibitions of posters and books, documentary and motion picture screenings, lectures, a master class for history and social science teachers, college and university faculty, poetry reading and musical performances about the Holodomor.