By using this site, you agree to our updated Privacy Policy
Get the latest information about Fall 2021 Repopulation and COVID-19. Before coming to campus, take the Daily Screening.
Skip to main content Skip to main navigation Skip to footer content

The Bachelor of Arts in Latin American Studies program supports and furthers the California State University’s commitment to diversity, internationalization, and inclusion. The major is designed to offer an interdisciplinary area studies program that provides students the opportunity to take courses in several departments, introducing them to different perspectives, and approaches to the study of Latin America.

Latin Americanists are interested primarily in the region or individual countries, giving them a well-rounded knowledge of the region and their specialist area. The interdisciplinary nature of Latin American Studies encourages students to think in a fluid way about issues and events, borrowing ideas from different academic approaches.

Students of Latin America study important traditional topics, such as poverty, injustice and inequality, but also exciting contemporary developments. As such, Latin American Studies provides students with an important window on power, society, and life beyond the region, creating an opportunity to bring important new perspectives to the study of so-called developed countries.

The B.A. in Latin American Studies will prepare students for a wide variety of jobs in different fields, including:

Students seeking the B.A. degree will take a core set of courses offered by the Departments of Chicano and Latin American Studies, History, and Economics. Majors are required to see a CLAS advisor during their first semester on campus.

Students seeking a double B.A. degree will take a core set of courses offered by the Departments of Chicano and Latin American Studies, History, and Economics. Double majors can have the Latin American B.A. as either a primary or secondary major. Double majors are required to see a CLAS advisor during their first semester on campus.

Students are encouraged to focus on an area of interest in Latin America, such as a country, region, or social issue affecting a particular region. The Latin American Studies Minor is an interdisciplinary program consisting of courses dealing with Latin America and the Caribbean with course offerings from several departments. 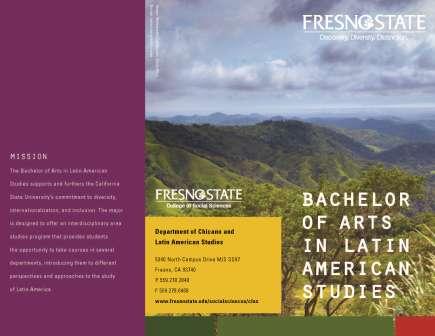 Click on the picture above to download our BROCHURE about the new B.A. in Latin American Studies.