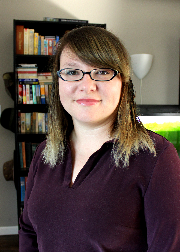 Congratulations to Nicole Hoke for being the 2014 Department’s Most Outstanding Student.  The Department is very proud of her and what she has accomplished. .

Nicole is an exceptional student with a strong passion for pursuit of knowledge and excellence. She arrived at Fresno State in the fall of 2011 as a student majoring in geography, and who was ready to make the most of the opportunities that were to come her way as she continued to pursue her dream of obtaining a college education.  Arriving as a transfer student with a GPA of 3.95, Nicole quickly got to work and made the President’s List in her first semester of the fall 2011, again in the spring of 2012, and once again in the fall of 2012. In the spring of 2013 she earned one “B” and made the Dean’s List. During her time here at Fresno State, Nicole has earned, so far, a major GPA of 4.000 and an overall GPA, so far, of 3.953, and that she will graduate from Fresno State as a Summa Cum Laude.

Nicole worked with Dr. Mohan Dangi on research focusing on understanding Life Cycle Analysis of Green Waste in Fresno, CA. She has presented her work at four conferences and won the Best poster presentation award at the 2013 Central California Research Symposium and her poster was among the finalists for an award at the Global Waste Management Symposium 2012. Because of her ability to comprehend technical-social interface topics easily, she stands out among her peers.

But Nicole doesn’t only excel in the classroom. She also excels in her service to the university and to the community. She has been involved in the Geography Club since 2011, and is presently serving a very active role in that club as its’ president. She has provided exceptional leadership for the club. She helped restart the Kappa Theta chapter of Gamma Theta Upsilon, the international geographic honor society and has striven to encourage club members to become involved in university and community related activities such as voter registration and Valley Children’s Kid’s Day. She also helped to prepare geography majors for careers in geography through participation in professional organizations such as Association of American Geographers, California Geographical Society, Association of Environmental Professionals, and American Planning Association. To that end, she has worked very closely with the central chapter of the Association of Environmental Professions to bring students and professionals together at events such as 2013 AEP Interactive Panel and this year’s upcoming AEP Speed-Networking. She organized the group of students that went to Tampa in April to attend the American Association of Geographers Annual Meeting.

Of all of her accomplishments at Fresno State, Nicole is most proud of the way she has demonstrated the importance of higher education to her children. She hopes they see that it is important to attend college, but more important to make the most of every opportunity and always go above and beyond what is required of you.